Regulation of Rod Genesis in Zebrafish by Polysialic Acid

Radial glia are cells that serve as migratory guides for immature neurons and direct them to the cortical plate in the human brain.  They also play a role in developing into adult neural stem cells, which promote a favorable environment for neurogenesis.

Similarly, Muller glia play a directing role for specialized rod progenitor cells, and this relationship between the two types of cells has been corroborated by the analysis of gene expression profiles of Muller glia and rod progenitor cells and overlaps between times of expression.(Bringmann et al, 2006).  It has been found that Muller glia play an important role in neurogenesis in zebrafish, and that in response to loss of photoreceptor cells, Muller glia can compensate the loss by regeneration of neurons (Bernardos et al, 2007). 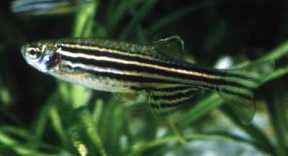 The zebrafish is a crucial organism in examining regeneration of retinal cells.

It has been established that neural cell adhesion molecule, or NCAM, plays a role in the regulation of development of neurons.  Polysialic acid, or polySia, is a post-translational modification that serves multiple regulatory functions in neuron differentiation and NCAM interaction.  The presence of polySia  induces migration of neuroblasts, while its absence induces neuronal differentiation and postpones proliferation.  PolySia is particularly important in the regulation of NCAM interaction, which induces differentiation of neurons.  Areas of localization of polySia differ in different organisms, as well as the level of downregulation or upregulation.  In previous experiments, polySia expression during different stages of brain development of zebrafish has been studied, and it is thought to play a role in neuron precursor cell migration (Rieger et al, 2008).  Retinoid X receptors have also been identified as playing an important role in the development of the zebrafish eye.  Treatment of zebrafish embryos with teratogens that are specific agonists of the retinoid X receptors, such as 9-cis-retinoic acid, have been shown to result in small or deformed eyes.

Zebrafish experience constant neurogenesis and differentiation in the retina, in the germinal zone at the retinal margin and in radial Muller glial cells.  These are found in the inner nuclear layer.  In order to determine the relationship of polySia expression to neurogenesis, immunohistochemistry was used to examine expression patterns of NCAM and polySia using NCAM-specific and polySia-specific antibodies.

Continuous neurogenesis in zebrafish retinas is a result of the constant expression of polysialic acid in the retina.

For the immunohistochemistry, sections of tissue from zebrafish larvae and eyes from which the cornea and lens were mounted onto slides.  Slides were also incubated with endoN in order to ensure that the immunoreactivity of polySia was specific.  Cells were also labeled with BrdU in order to observe proliferating cells.  Tissue was then observed using immunogold electron microscopy.

At 2.3 days post fertilization, NCAM was expressed both in the retina and the brain, but polySia was expressed only in the brain.  This is seen in Figure 1A, 1B and 1C.  At this stage, morphogenesis is still in progress.

At 3.5 days post fertilization, the patterns of NCAM and polySia expression were unchanged from the first stage.

At 4.3 days post fertilization, polySia reactivity was observed in the retina, and NCAM expression was unchanged- the strongest regions of expression were still the outer and inner plexiform layers.  This can be seen in Figure 1D, 1E and 1F.

Kustermann et al 2010. Figure 1. (D) polySia expression has migrated to the ventral region of the outer nuclear layer of the retina. (E) NCAM expression can still be seen both in the retina and brain but has been intensified in the inner and outer plexiform layers (1 and 2). (F) polySia expression is found in significantly close proximity to rod cells.

BrdU labeling identified proliferating cells in mature zebrafish retinas, and polySia and NCAM were co-expressed in the central outer nuclear membrane, as shown in Figure 5.  It is noteworthy that an overlap of polySia expression and CRALBP expression can be seen, contradicting findings in the developing zebrafish retina.  PolySia expression was also not found around BrdU-stained cells.

In this study, it was found that polySia expression increased during development, which contrasts previous findings about polySia activity in zebrafish brain development.  The increase of polySia during development could indicate that polySia is a factor that keeps cells in their undifferentiated states and regulates migration of  neuron precursor cells, rather than serving as an expedient for neurogenesis.

However, the findings of this study also present implications for rod cell genesis.  PolySia was found to surround rod cells in mature zebrafish retinas, even though these rod cells did not express polySia themselves, and it is known that rod cell precursors migrate along the Muller glia towards the external membrane before differentiation.  Due to the tight association of polySia with CRALBP expression and Muller glia found in mature retinas,  this indicates that polySia may be vital in producing an environment suitable for retinal rod generation.