Most living reptiles are covered in a hard, mechanically resistant corneous layer crucial to the success of the vertebrate transition to land.  Studying the development of the primitive reptile epidermis can provide insight into the mechanism of this transition.  The tuatara (Sphenodon punctatus) and the Guenther’s tuatara (Sphenodon guntheri) are last extant member of the Sphenodontidae family of primitive reptiles and the closest extant species to the Lepidosaurians.  They live only on remote islands of New Zealand and have archaic anatomical features.  Tuatara embryonic development is longer than most other reptiles at 9-15 months, and the development is highly dependent on the surrounding environmental temperature [1].  Tuataras shed once or twice a year, but the renewal period between molts is not currently known.  As tuataras have such archaic characteristics, the sequence of layer formation of the tuatara epidermis models the sequence of epidermal evolution. 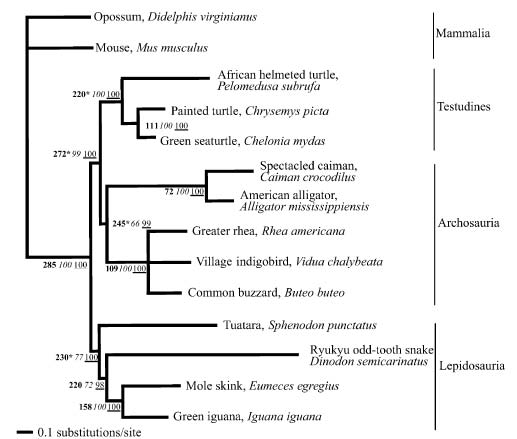 The hard skin appendages of amniotes are divided into scales, feathers, and hairs.  Reptiles are distinguished from other anapsids by the composition of beta-keratins in the reptilian epidermis.  Scales encompass areas of dermial-epidermal interactions responsible for the activation of epidermal genes encoding the production of beta-keratins.  Subsequent reptilian diversification is characterized by differences in coiled-coil keratins and the associated proteins in the inner-filament matrix of reptilian scales.  Mutations in the ancestral genes for glycine-serine-rich alpha-keratins produced a new class of smaller matrix proteins.  In Sauropsids, these matrix proteins originated after mutations resulting in proline enrichment that gave rise to a double beta-folded sequence of 2o amino acids known as the core-box.  This core-box determines the beta-keratin patterning of protein polymerization.  In Lepidosaurians and tuataras, the small matrix proteins were derived from high glycine and high cysteine proline proteins.  Archosaurians and Chelonians have higher prevalences of high glycine-proline-tyrosine (non feather) proteins and glycine-tyrosine poor (feather) proteins.  Theraspids and mammals have high glycine-tyrosine or high cysteine proteins but no core box. Generally, beta-keratins are prevalent in Sauropsids, Archosaurians, and Chelonians (in feathers, claws, and bird beaks), while softer alpha-keratins are prevalent in Lepidosaurians (lizards and snakes) and mammals due to the different composition and organization of fibrous and matrix components between proteins in the corneous material.  As primitive reptiles, the tuatara are a critical step in elucidating the step in keratin evolution between lizards and snakes and the Archosaurians and Chelonians. [2]

Lepidosaurians and tuataras have a multilayered epidermis with six distinct layers at complete development.  These layers are the oberhautchen, beta-, mesos-, alpha-, lacunar, and clear layers.  Scales derive from outfoldings of the epidermis and dermis, and scale development starts at dorsal end of body and proximal end of the tail before continuing to the rest of the region [1]. 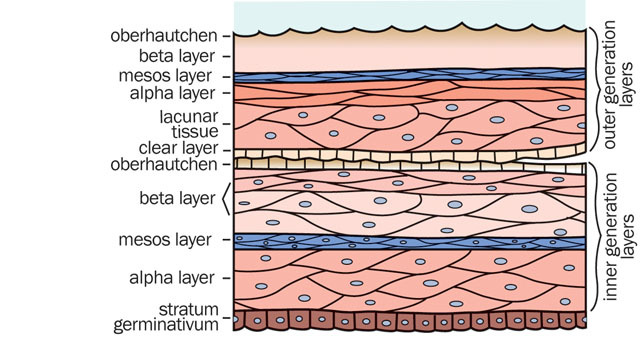 Lepidosaurians and tuataras cyclically shed the outermost epidermis, a trait not shared by chelonians and crocodiles.  The gradient dispersion of coarse filaments among keratin led to the cornification of the epidermis, but the evolutionary reduction in beta-keratin production allowed for the regular shedding of the outmost corneous layer.  Modern evolved reptiles have highly specified and regulated formation of alpha- and beta- layers for shedding.  Snakes and lizards have formalized shedding complexes beneath the inner periderm between the oberhautchen and embryonic clear layer.  A similar shedding occurs between embryonic development and hatching into an adult.  Unlike snakes and lizards, tuataras do not have a shedding complex in the embryonic epidermis like that in the adult epidermis [2].  The embryonic tuatara epidermis represents a stage preceding the evolution of the shedding complex for molting in squamates.  The tuatara sheds via an intermediate alpha/beta mixed region.  One layer of partially overlapped oberhautchen cells merges with the beta layer below to form a serrated line [2].  The last deposited embryonic layer, the outer layer in this region, is lost while a new beta layer is formed underneath.  Studies of preserved tuatara molts confirms shedding occurs along the lowermost region of the alpha layer along the ill-defined oberhautchen [2].

The early embryonic dermis of the tuatara is initially flat, bilayered, and rests on undifferentiated, mesenchymal dermal material.  The dermis subdivides into loose superficial and deep fibrous dermis.  The loose superficial material is mesenchymal and elongated while the deep tissue is fusiform, has large bundles of collagen, and mostly forms before other epidermal stratification unlike stratification in other reptiles.  The embryonic epidermis separates into outer and inner periderm layers that accumulate thick coarse filaments and alpha-keratin filaments [1].  Like development of alligators, beta-cells begin formation underneath the periderm only after separation of the outer and inner periderm layers.  Beneath the periderm, beta-cells and the oberhautchen layer form small horny tips overlapping the beta-cell margins.  The embryonic tips form a lamellate-spinulated pattern as in the adult epidermis [1]. Formation of the Beta Layer

The tuatara beta-layer is responsible for the mechanical resistance of scales, but it is mostly cellularized instead of syncytial as in squamates and Lapidosaurians [1]. The beta-later is produced beneath the embryonic epidermis, but in tuataras, shedding occurs between corneous layers of different types rather than localized to shedding complex [1].  This is similar to the beta processing and shedding in Australian agamine lizards  In these lizards, there is no distinct clear layer, and the oberhautchen and beta layers merge to form compact beta layer that forms spiny protrusions.

Differentiation of the Alpha Layer

After beta layer and mesos are formed, the alpha layer thickens.  In tuataras, the distribution of alpha-keratins is graduated between the mesos and alpha layers, similar to the structure in lizards [2].  The cells in the intermediate mesos layer have characteristics of both alpha and beta layers.  The alpha layers undergo alpha-keratinization, but beta-keratin is absent [2].

An epidermal barrier for limiting water movement was crucial for amniotic transition to land.  Matrix organelles in primitive reptiles indicate the amniote epidermis acquired interkeratin matrix protiens early in this transition.  In reptilian embryos, coarse filaments are responsible for the cornification of the periderm before hatching.  Tuatara embryos require about 4-8 months for complete epidermal diversification while this change only takes the last 3 weeks of embryonic development in lizards.  Tuataras have more pliable and stretchy skin than other reptiles because of the development of the alpha-layer, but a distinct water barrier is intact due to the mesos region of the alpha-layer.  The defined cell envelope layers of the primitive tuatara embryo reflect the early evolution of the epidermis of more advanced reptiles.

The scope of both Alibardi papers was complete and reasonable in the presentation of the purpose behind the investigation, the reasoning for each method selection, and the application of the results to the larger understanding of the transition of animals to land.  The papers together could be strengthened by cross referencing findings of other animals skin development and including any applications of these findings to the betterment of reptiles today by mentioning current conditions or afflictions tuatara or other reptiles suffer from that could be benefited by this investigation of epidermal development.