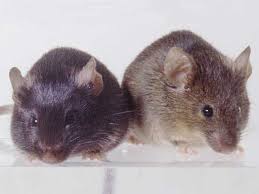 THE MOUSE: ONE OF THE TOP MODEL ORGANISMS?

Arn’t they so cute!    These precious little creatures called mice are more than just little animals that some would have as pets, they are a huge importance to the science/health care world. Little do you know, these animals are closely genetically and physiologically similar to humans. Their genomes are easy to manipulate and analyze even though their genome is the same size as humans.  Mice are better at probing the immune, endocrine, nervous, cardiovascular, skeletal and other complex physiological systems.[1] It is amazing how closely related they are to us humans. They even naturally develop diseases to systems like us. Through experiments, these organisms allow cost efficient maintenance and they multiply or reproduce quickly, which is the complete opposite of humans. All these factors play a vital role in the urgency of research. Who would have thought that a little mammal such as a mouse, would be this valuable.

The reasons for the previous visuals/videos, are to compare the human and the mouse development and demonstrate the close relatedness.

WNT PATHWAY AND ITS VALUE! 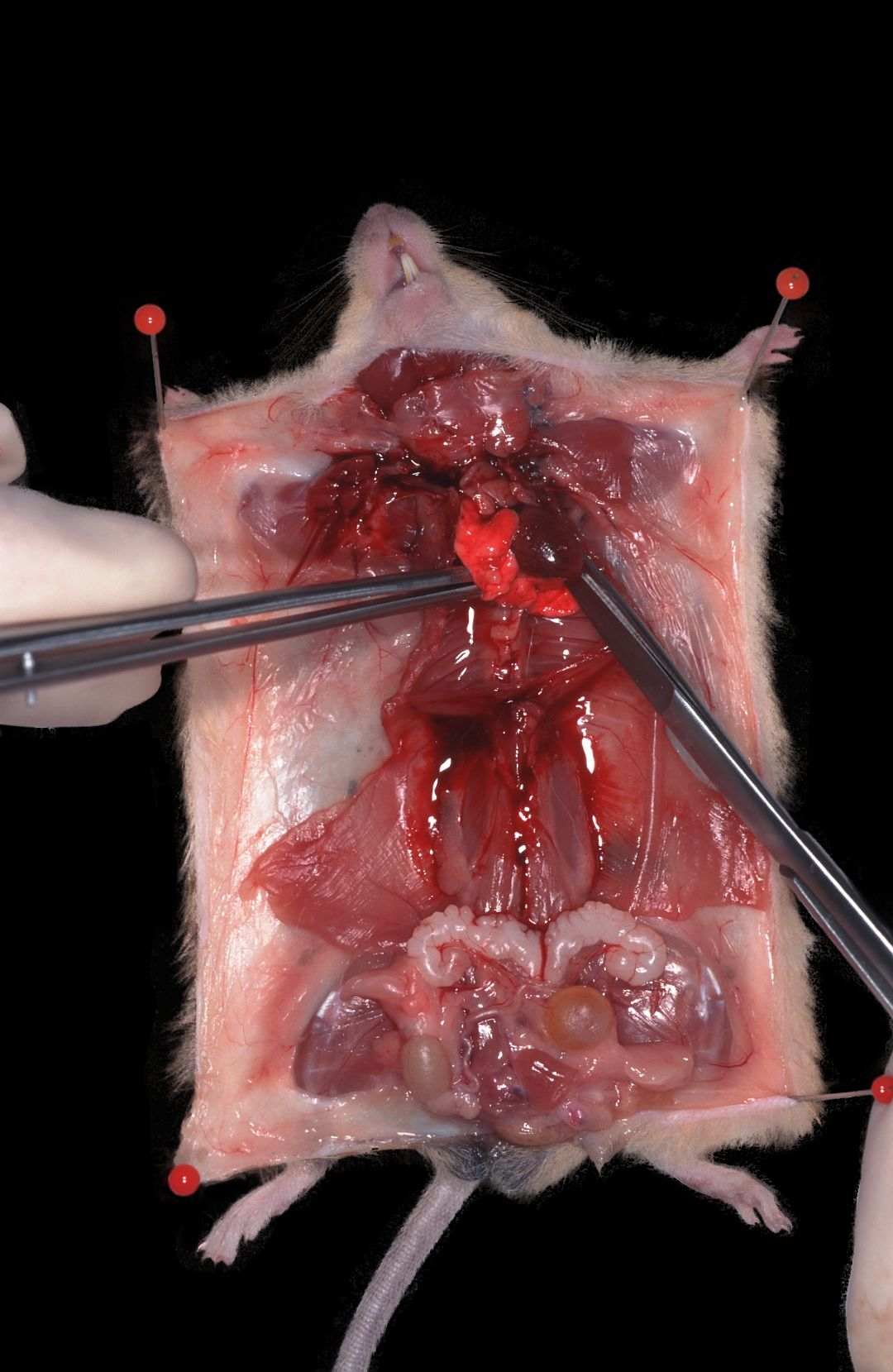 During mouse embryonic development, the Wnt pathway establishes the basic body plan. As the mouse embryo develops, wnt pathway becomes important in different process such as the central nervous systems, hair and etc. Wnt are even significant for proper formation of organs such as the lung and kidneys. [2]

Wnt proteins form a family of highly conserved secreted signaling molecules that regulate cell-to-cell interactions during embryogenesis. Wnt ligands are secreted growth factors that mediate a vast array of cellular responses by binding to cell membrane Frizzled (Fzd) receptors, LRP5/6 co-receptors and other receptors, including ROR2.Mutation with in the pathway cause develepmental defects. These proteins are popular throughout mammalian species signaling.

Wntless (Wls), a gene highly conserved across the animal kingdom, encodes for a transmembrane protein that mediates Wnt ligand secretion.  Wls is expressed in developing lungs, wherein Wnt signaling is necessary for pulmonary morphogenesis. It was hypothesized  that Wls plays a critical role in modulating Wnt signaling during lung development and therefore affects processes critical for pulmonary morphogenesis.

Lung morphogenesis is  dependent on three layers, epithelium, mesenchyme and endothelium. Lung morphogenesis relies on a variety of signaling pathways including Wnt, BMP, Shh and FGF. Wntless (Wls), also known as Sprinter, Evi, and Gpr177, is a cargo receptor protein whom directs Wnt ligands from the Golgi apparatus to the cell surface. Wls is known to control Wnt lignand production.  Different experiments  were completed by deleting Wls from different compartments of the embryonic lung and  different roles for Wnt signaling in pulmonary vascular development were discovered. Wnt signaling induced  endothelial cells differation by modulating expression of Vegf A and angiopoietin 1, and their receptors KDR (Kinase insert domain receptor) and Tie2 (TEK receptor tyrosine kinase).  In summary, it is shown that these mechanisms by which control of Wnt ligand secretion affects murine lung morphogenesis. Resulting in Wls regulating Wnt signaling pathways.

The authors started with their  first experiment by crossing a Wls knock out mouse with a Shh-Cre transgenic mouse.  They then viewed and confirmed the deletion by PCR. The results support the hypothesis that epithelial Wls expression is an essential for regulating respiratory tract morphogenesis. (view Fig. 1) 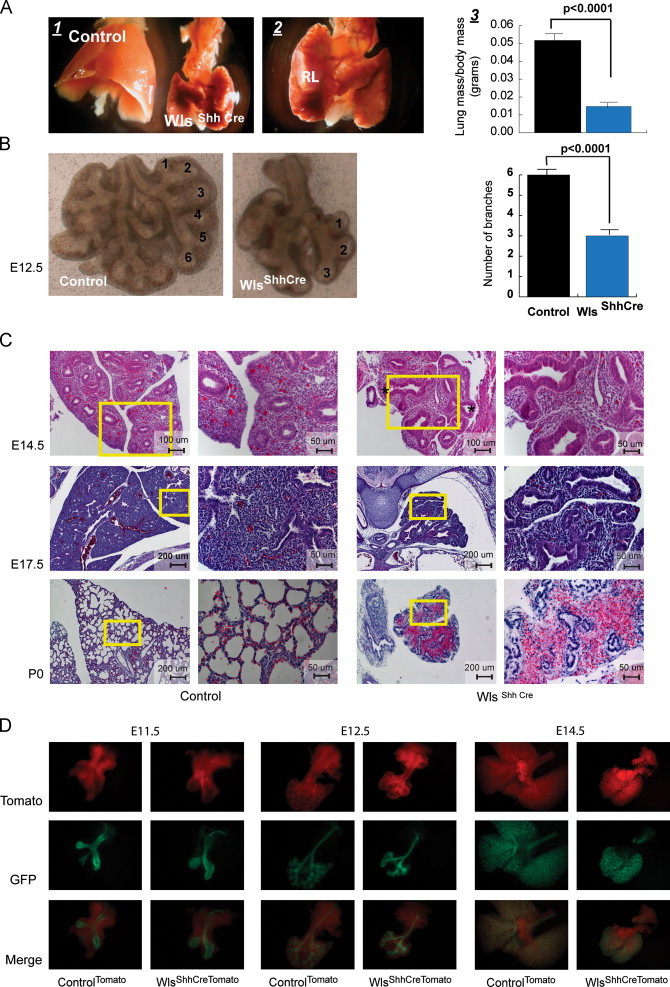 From the Results in Fig.1, they then wanted to analyze whether proximal to distal patterning was disrupted by deletion of Wls.  Epithelial cell markers Sox2 and Scgb1a1 and distal progenitor cell markers Sox9 and proSPC were used to perform an immunofluorescence staining.  Sox9 was expressed in peripheral epithelial cells, supporting  that respiratory epithelium progenitors were properly specified along the proximal-distal axis.  (view Fig. 2)

Fig. 2. Wls is necessary for pulmonary epithelial cell differentiation. A-D: Immunofluorescence staining was performed for Sox2 and Sox9. While no differences in expression pattern were detected at E14.5 (A, B), Sox9 staining persisted in epithelial cells of the peripheral cysts of the WlsShhCre lungs (arrows, inset D) demonstrating perturbed proximal-distal patterning of the pulmonary epithelium of E18.5 WlsShhCre (compared to controls, arrow head C). Red blood cells were pseudocolored in white. E-H: Immunohistochemistry was performed on sections of E18.5 lungs for Scgb1a1 (E, F), a marker for conducting airway epithelial cells, and proSP-C (G, H), a marker for peripheral respiratory epithelial cells. In WlsShhCre lungs, the domain of Scbg1A1 expression was expanded into the periphery (F), while staining for proSP-C was not detectable (H).

Next they looked at how epithelial Wls were necessary for pulmonary vascular development. Since Wnt7b is required for vascular muscle cell development, αSMA mRNA and the expression pattern were analyzed. From viewing the results, αSMA mRNA was decreased in whole lung homogenate from WlsShhCre mice. In contrast, abnormalities in airway αSMA staining were observed in WlsShhCre lungs being decreased and discontinuous along the airways.  These data support the concept that epithelial Wls is required for development of endothelial cells in the pulmonary microvasculature. (view Fig. 4) 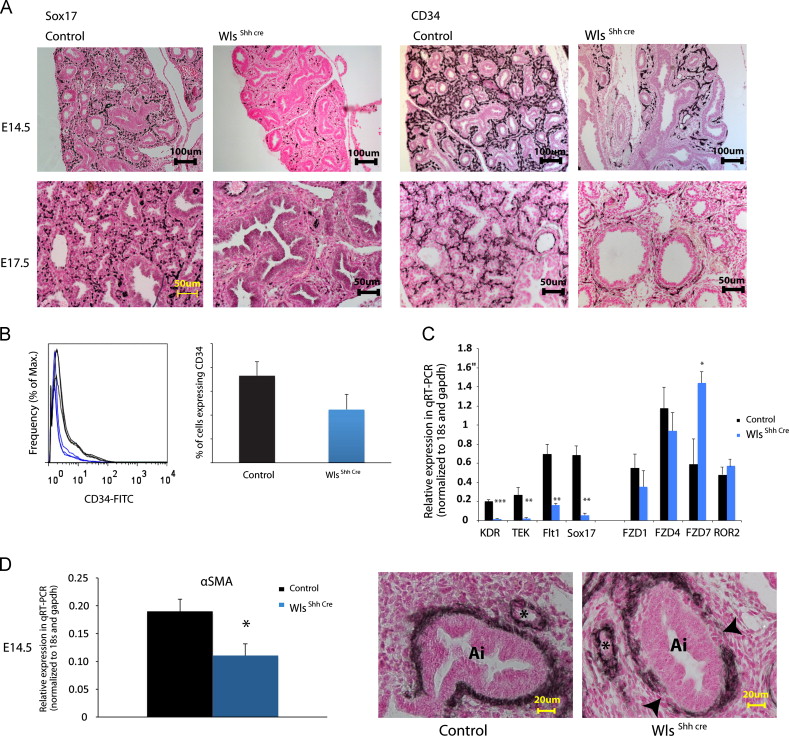 Since mesenchymal cell proliferation  was reduced in WlsShhCre lungs, this would be a reasonable explanation  that why later in development, there were reduced numbers of endothelial cells. This hypothesis was then tested, by crossing the Wlsf/wt ShhCre/wt with Tie2lacZ mice. In these mice, Tie2 promoter selectively drives the expression of the LacZ reporter. The LacZ staining was reduced in WlsShhCre early, indicating decreased vascularization. Through confocal images, decreased formation of the pulmonary vasculature were shown. (view Fig. 6) 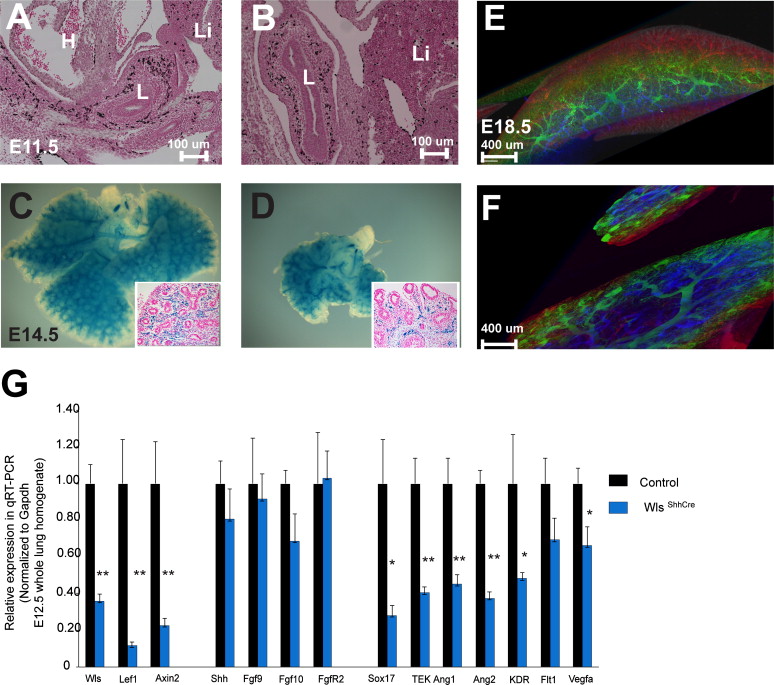 WlsShhCre embryonic lung explants were treated with recombinant Wnt5a ligand, which is a ligand that mediates non-canonical signaling in several contexts including developing lungs. Certain factors were restored, partially restored, or not even induced by addition of Wnt5a. This observation suggest that Wnt5a influences pulmonary endothelial differentiation, via a mechanism that may involve non-canonical Wnt signaling. (View Fig 7B-C) 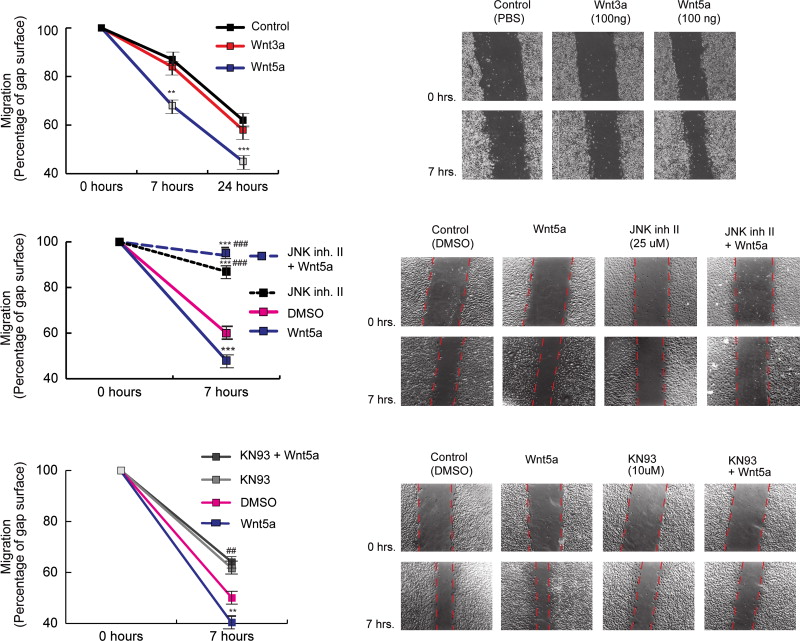 Wls modulates Wnt signaling pathways during lung development which is needed for growth, differentiation and patterning of the respiratory epithelium and endothelium.  Eventhough, Wnt ligands are expressed in both epithelial and mesenchymal layers, when Wls knockout was performed, it demonstrated that Wnt ligand secretion from the epithelium is critical for pulmonary morphogenesis. Wls promotes mesenchymal and endothelial cell differentiation via a mechanism that requires secretion of Wnt5a, a Wnt ligand, expressed by the respiratory epithelium 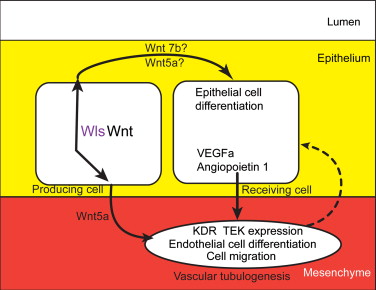 This paper demonstrated a variety of experiments to prove their hypothesis. Which makes the conclusion more valid than if there were less experiments performed.

Are there other factors that are expressed in developing lungs besides Wls and if so, would they play an effect on the Wnt pathways? Other factors were not discussed, so these questions were drawn.