Humans go through generation every day. We lose and replace almost all the cells in our bodies but, only regenerate small damages to our bodies such as epithelial cells. However, there are animals that can regenerate from devastating damage of their bodies. For example, lizards can cut its own tail and grow them back to normal (Image 1). In humans, this is a crazy fantasy. Therefore, regeneration is a fascinating topic for many scientists. 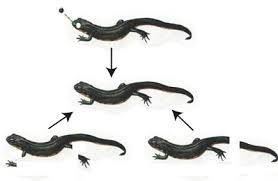 This is also true in dental industries. How many people are comfortable going into dental office for check –ups or treatment? What if we, humans, can regenerate teeth?  If cavity happens, instead of drilling and filling, a dentist can induce teeth regeneration to get a new one. This incredible phenomenon already exists in number of organisms, including cichlid.

Interestingly, this incredible ability to regenerate teeth is found to utilize the well-known mechanisms from embryonic patterning that are present in mammals including human such as Notch, shh, and bmp signaling in this study (Fraser, G J, et al , 2013).

Cichlid is one of few model organisms that have oral teeth. Although some other model organisms do have teeth, cichlid’s regenerative ability and diverse shapes of teeth depicts its importance for various researches. All different species of cichlid from Lake Malawi, East Africa, used in the experiments shared a common ancestor, having genetic similarity yet they represent wide range of different dental patterns and shapes (Image 2).

In addition to diverse shapes of teeth, Cichlids exhibit intramedullary replacement, where tooth is grown from inside the jawbone, which is similar to many mammals. Therefore, understanding the pathway utilized by cichlids may give insights on how mammalian teeth can be induced for regeneration. Furthermore, in this study, researchers discovered that the process of tooth morphogenesis and replacement are linked by common pathways that control the balance between growth, proliferation and differentiation. Additionally, they suggest that a coupling of common pathways that allows morphogenesis and life-long regeneration is ancestral trait of vertebrate that was largely lost through evolution.

Scientists and dentists are hoping to identify ways to induce tooth regeneration of humans. For example, if regenerative method is to be found, it can be used to regenerate nerves and blood vessels that’d been removed during root canal and can serve as alternative to current dental implant for missing teeth.

Unlike humans, cichlids can induce teeth regeneration that occurs regularly, around every 100 days. Additionally, cichlids utilize one-for-one replacement system, where each functional tooth holds a place for subsequent tooth to come and provide epithelial cells that are required for growth and differentiation. The unique feature of Cichlid’s one-for-one replacement is that, teeth are replaced as they are lost unlike other bony fish like shark or blowfish, which makes replacement teeth in advance (Video 1).

In this study, replacement tooth development is divided into three stages: initiation, cellular differentiation and secretion.

Initiation of tooth replacement occurs when each unit of successional lamina (SL) is formed by labial epithelial cells that’s associated with first generation of teeth (depicted by green in Fig 1). Then, SL interacts with dental epithelium (depicted by red in Fig 1) to initiate continued supply of tooth replacement (Fig. 1A, B, C). As SL extends below the existing tooth, it interacts with mesenchyme by gubernacular cord, thin epithelial stream of cells. Then, bone starts to form around it while maintaining connection of extramedullary epithelium and the intramedullary mesenchyme.

Lastly, in secretion stage, ameloblasts and odontoblasts secrete their hard tissue matrices. Ameloblasts continue to elongate and eruption process initiates (Fig 1. G,H, I). The gubernacular cord that connects the oral epithelium with the successional tooth breaks down and increases in proliferation at the cervical loops, giving rise to additional enameloid-secreting cells to effectively push out the old tooth and replace its place.

More significant findings of this paper are in its discovery in pathways. Building on from the previous studies, they focused on the pathway that is presently known in other regenerating properties such as hairs, feathers and mouse molars and incisors. This is because of limited current knowledge of tooth regeneration in vertebrates and it’s been found that some of the same genes that are also expressed in successional lamina (Fig 2).

Using this experiment as a basis, they examined expression of genes from five signaling pathways involved in the development and regeneration of vertebrate’s organs in different tooth replacement stages. The five signaling pathways were BMP, FGF, Shh, Notch, and Wnt/beta-catenin. In situ hybridization was used to observe the gene expressed through different stages of teeth growth. The results show that there are different levels of expression in different genes in different locations of tooth bud. The balance of various signals and antagonists allow proper development of a tooth. For example, bmp2 is expressed in high level mostly in papilla, whereas bmp4 is expressed more on the tip. The sostdc, the repressor of bmp4 is expressed in all other places in the bud (Fig 3 A,B,C). Also, it was found that in different stages, level of expression for these genes change.  From the result, it was observed that all the genes from the five pathways have different level of expression from differential stage to secretion stage (Fig 3 & Fig 4 vs Fig 5 &Fig 6).

Fig. 3. Expression of genes from the BMP (A–C), FGF (D–F), and Hh pathways (G–I) during the differentiation stage of cichlid replacement tooth development.

Fig. 4. Expression of genes from the Notch (A–C) and Wnt pathways (D–F) during the differentiation stage of cichlid replacement tooth development.

Fig 5. Expression of genes from the BMP (A–C), FGF (D–F), and Hh pathways (G–I) during the secretion stage of cichlid replacement tooth development.

Fig. 6. Expression of genes from the Notch (A–C) and Wnt pathways (D–F) during the secretion stage of cichlid replacement tooth development.

Finally, from these experiments, authors were able to identify and confirm some of the key pathways that plays a major role in morphogenesis and replacement of the tooth. With these, they predicted that they should be able to induce change to developing tooth by manipulating the pathway with small molecules. By using antagonist, they tried to inhibit these pathways. Surprisingly, the results show that there were no replacement defect when any of two pathways were manipulated, only shapes of the tooth, indicating there are some complementary among different pathways. However, targeting any of BMP, Notch or Wnt/beta-catenin, affected the process of tooth replacement, as well as tooth shape(Fig 7) . Through this experiment, they were able to confirm that teeth regeneration pathway is possible to be manipulated. This will be a base for further studies to have better understanding of these pathways and their relationships to one another.

The extensive experiments and integration of the information acquired from this study are significant. As it’s indicated in the study, many researches that are conducted don’t consider the complexity of the mechanisms and often ignore other potential linkages. This study has done a great job of finding new knowledge and redefining the past knowledge. Instead of only looking by one method, it took measures to observe from different perspectives by using different staining methods. Finding the pathway will further enhance future research.

In the next or other research, experiments of inducing mice to regenerate teeth through signaling pathway can be conducted. Also, as it is suggested in the paper, the role of sox2 genes can be further investigated because sox2 has function of maintaining undifferentiated stem state in embryonic and adult stem cells (Avilion et al., 2003) and is present in mouse incisor (Juuri et al, 2012), which has renewal growth.

Only if these findings can transfer to humans, people will not need to feel pain for dental procedures any more. Thus, this is an exciting new finding that could potentially lead a way to recover long lost regenerative mechanism in humans.

Meanwhile, here is an interesting video about “self-regenerating” your teeth.