Dictyostelium is a member of the Amoebozoa, a taxon that is basal to the Fungi-Metazoa branch. 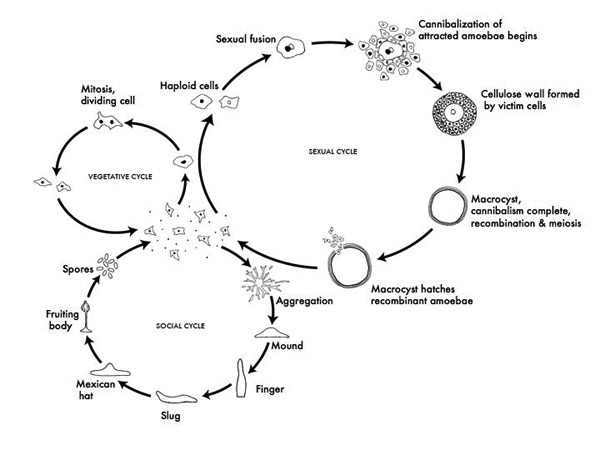 Development of Dictyostelium discoideum poses common questions for development of any multicellular organism:

In migrating slugs, the tip is a source of cAMP

Fig. 3 from Soderbom & Loomis 1998. Model of prestalk signaling to prespore cells. The prestalk-specific Tag membrane complex is essential for the release of a peptide signal (SDF-2; filled circles) that triggers terminal differentiation of prespore cells. The signal is transduced in prespore cells by the membrane-embedded sensor kinase DhkA and leads indirectly (via the H2 component, RdeA, and several undefined components, which might include the MAP kinase ERK2) to inhibition of RegA. When cAMP is synthesized by an adenylyl cyclase (AC) and its levels rise, protein kinase A (PKA) is activated and sporulation ensues. Abbreviations: PKA-C, catalytic subunit of PKA; PKA-R, regulatory subunit of PKA.

Figure 4 from Soderbom & Loomis, 1998 Proposed culmination network. Prestalk cells secrete the phosphopeptide SDF-1. A few hours later, prestalk cells secrete another peptide signal, SDF-2, in a manner dependent on the prestalk-specific membrane protein, TagC. Prespore cells respond to SDF-2 in a manner dependent on the histidine kinase DhkA. The signal transduction pathway initiated by DhkA leads to the inhibition of RegA. This positive-feedback system is dependent on DhkA and results in the rapid release of SDF-2 from prestalk cells. When RegA is inhibited in prespore cells, cAMP accumulates and activates PKA, leading to rapid sporulation.”

Chen & Schaap (2012) reported evidence that cyclic di-(3′:5′)-guanosine monophosphate (c-di-GMP) is the morphogen responsible for stalk cell differentiation. The diguanylate cyclase gene (DgcA) is expressed at the tip of the slug. DcgA knockouts remain in the slug stage and fail to form fruiting bodies. No stalk-specific genes are expressed in these mutants. The mutant phenotype is rescued by addition of c-di-GMP.

Early, A., T. Abe and J. Williams, 1995.  Evidence for positional differentiation of prestalk cells and for a morphogenetic gradient in Dictyostelium, Cell 83:91-99.

Check out the following Web sites!