Aging processes evolve just as other metabolic and developmental processes. Aging rates evolve/adapt to match your environment, so that an organism may increase its longevity and resist stressors. Thus, there is a broad range of aging rates to be studied.

By taking a comparative approach and investigating a variety of these aging rates and what affects them, we can possibly identify key aging mechanisms and new pathways to serve as targets for aging interventions.

Rotifers are microinvertebrate aquatic animals of the Lophotrochozoan phylum Rotifera. They show:

Figure 1. This is just one example of a life table made using a rotifer as model organism. The cumulative probabilities of living a lifespan from 5-24 days are plotted with 95% confidence intervals. Black dots represent individual rotifers from a cohort of 80.

With a rotifer model and cohort life table assays, this paper reviews certain methods meant to extend lifespan via:

This paper delves into the current methodology used and the general progress we have made using rotifers as a model for studying aging.

In their study, the specimen used was the monogonont (single gonad) rotifer Brachionus manjavacas (as pictured above). They used rotifers with 3 different modesof reproduction:

The rotifers were subject to 6 different diets- variations of ad libitum feeding (‘at one’s pleasure’, AL), intermittent fasting (IF), and chronic caloric restriction (CCR). They found that both the mode of reproduction and type of diet affected the lifespan, fecundity, and trade-off between lifespan and fecundity (Gribble & Mark Welch 2013).

As an extension of fecundity, the effects of maternal CR on the offspring has also been investigated. Maternal caloric restriction has been found inhibit the deleterious effects of old maternal age on offspring (Kaneko et al. 2011).

To understand intraspecific (within a species) evolutionary conservation of lifespan extension by CR, they tested 12 isolates closely related to B. manjavacas. They found that lifespan under AL varied among all the isolates, and that AL was a good predictor of how the isolates would respond to a CCR diet. Long-lived isolates under AL were less likely to live longer under CCR; therefore, there was a lack of trade-off between lifespan and fecundity. In addition, even when food intake was similar for IF and CCR, there were differences in fecundity and lifespan. This suggests:

By exposing rotifers to certain pairs of antioxidants, they was able to extend the organisms’ life span. Pairs of antioxidants were used because it is unlikely that independent pathways are at work with aging, but rather all paths intersect in some way.

This is exactly what was found when interactions between inhibitors of the Target of rapamycin (TOR) kinase signaling pathway and the jun-N-terminal kinase (JNK) pathway significantly affected aging in rotifers. TOR takes in signals for growth conditions, nutrient availability, energy status, and physiological stresses and then uses this information to form a aging plan that matches the resource environment. The JNK pathway responds to stressors like UV irradiation, reactive oxygen species, DNA damage, heat, and bacterial antigens (Snell et al. 2014).

The control treatment (black curve) shows a higher mortality rate, especially in the reproductive phase (Figure 3a), than the molecular inhibitor treatments. By inhibiting both pathways, they noted more protection to starvation, UV, and osmotic stress compared to just inhibiting 1 pathway. This implies that the two pathways work together to modulate energy use and aging. 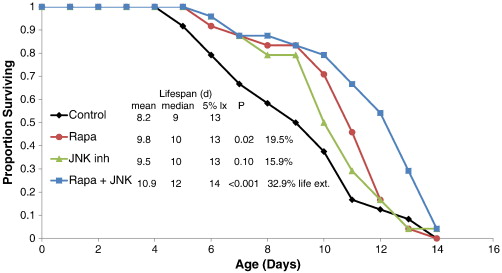 Figure 2. Shows how the inhibition of both Rapamycin and JNK pathways, in blue, leads to a greater lifespan increase than inhibition of just one of the pathways. (Snell et al. 2014)

Figure 3b. looks at the effect of calorie intake on mortality; it shows significant differences in lifespan under different diets and also under different reproducing modes. The control (AL) shows higher mortality compared to CCR or IF.

Due to their interest in maternal CF effects on offspring, they take a closer look at their results during reproduction (days 5-13), as shown in Figure 4. Figure 4a. JNK and rapamycin inhibitor treatments shower lower rates of mortality than the control, suggesting some mechanism of protection, specifically during the reproductive phase of the life cycle.

Figure 4b. CCR and IF diets seems to also afford some sort of protection, specifically during the reproductive phase in comparison to the control.

Figure 4. This is a comparison of the mortality rates in the reproductive phase. (a) TOR and JNK inhibitor treatments (b) AL – ad libitum feeding, CCR – chronic caloric restriction, IF- intermittent fasting.

Due to the interaction of pathways, like TOR and JNK kinase pathways, it is important to conduct whole animal rather than cellular assays. Rotifers are good animal models for this purpose in that they easy to handle, and have a rapid generation time. Snare et al. was able to screen 200 molecules from red algae using rotifers; they found that 3 of the 200 molecules increased rotifer lifespan by 9-14%.

Rotifers were allowed to reproduce for a year (84 generations) in a lab setting. It was concluded that asexual females evolved a 26% increase in lifespan, 23% decrease in rate of aging when grown in a stable environment with constant food and constant population density compared to a highly variable environment. Longer lifespan was selected for in the stable environment in order to maximize the time for reproduction. These results support their theory that lifespan and senescence rates are “adjustable”, in that they evolve to adapt to the environment.

Now with availability of next-generation sequencing, rotifers are especially easy to genetically manipulate. RNA-Seq analysis can then be used to identify the specific genes associated with modulating aging that have evolved to better adapt to the environment. As pertains to this experiment, RNA-Seq was used to measure differential expression across genes in response to different CR diets and RNAi, used to knock down specific genes, allowed them to make the connection between TOR and JNK pathways and their effects on aging.

It is clear that aging is a complex very involved process, comprised of a network of interactions.

I would have liked to have seen a comparison of the morality rates for inhibition of both TOR and JNK pathways to the control, TOR inhibition alone, and JNK inhibition alone. This data is missing from Figure 4a. More of the logic behind the CR regiment could have been offered in the background.

This paper clearly depicts the strengths of using rotifers as a model for aging and the need for more novel animal models, like rotifers, in order to perform comparative biogerontology. Many of the discoveries reviewed in this paper are new and show promising results that will help better our understanding of the aging process.