The process and regulation of metamorphosis, in Drosophila as well as many other insects, is of vital importance as it is the mechanism by which such organisms sexually mature, and, thus, can pass on their genetic traits.  The beginning of the process follows a spike in the hormone ecdysone, as seen in the below image, as it is synthesized by the prothoracic gland.  This facilitates transcriptional regulation of accessory organs such as the salivary glands. (Deng) 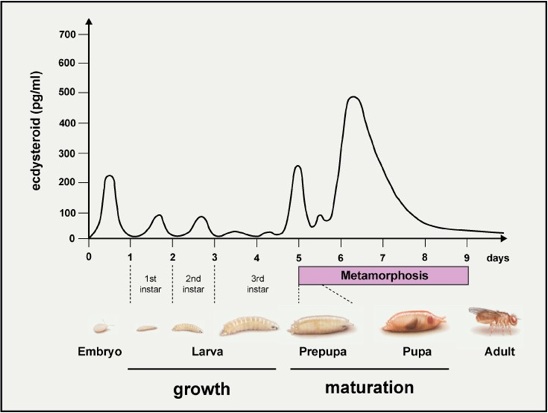 Ecdysone hormone spike is followed by onset of pupa stage and metamorphosis.

Drosophila CncC and dKeap1 proteins, homologous to the mammalian Nrf2 (NF-E2-Related Factor 2) and Keap1 (Kelch-like ECH-Associated Protein 1), control many of the cellular responses to xenobiotic (foreign-origin) compounds, including carcinogens.  Through a mouse knockout of Nrf2, the researchers had discovered increased carcinogens, suggesting that Nrf2, a transcription factor, works to counteract the onset of cancer.  Keap1 acts as an inhibitor of Nrf2 through promotion of its degradation. Both proteins have been implicated in the initiation and regulation of metamorphosis in Drosophila.  Regulatory pathways such as this also play vital roles in protecting cells against xenobiotic damage. (Taguchi)

CncC and dKeap1 were found by the authors to bind to the genes activated by ecdysone in these response cells.  With the reduction of the CncC-dKeap1 protein complex, activation of those targets was not effective, depleting early gene transcription.  Through reduction in CncC and dKeap1, the researchers found resulting premature pupae formation.  These observations present strong roles for the proteins in coordinating metamorphosis in Drosophila.

CncC and dKeap1 were tested on whether they regulated transcription of early puff genes through depletion of the proteins in the salivary glands and measuring the resulting transcription of ecdysone-regulated genes.  Figures 1A and 1B shows that for both proteins, reduction of either CncC or dKeap1, respectively, reduced the levels of almost all ecydsone-regulated early puff and glue gene transcripts.  The effect on late puff gene transcripts was minimal.  The proteins diverged on transcription levels of gstD1 and gstE1 xenobiotic response genes, indicating variable roles each protein plays in the metamorphic process.  Simple depletion of either protein in the salivary gland had no affect on time of pupation, or size. A shows the effect of CncC depletion on various target genes. B shows the same for dKeap1 depletion.

The researchers found that with expression of shRNA targetting either CncC or dKeap1, there was a delay of pupilation in drosophila by up to 50 hours.  Figure 2A shows expression of differential shRNA targeting extending the time between third instar molting and pupation onset by 40 to 125%.  Figure 2C shows the effects of full CncC on delay of 20E levels compared to CncC-deficient in the controls.  The result of delayed pupilation in increase in pupae length, as both Figures 2B and 2E show for shRNA targeting CncC and dKeap1, respectively, compared to their controls. These results indicate that CncC and dKeap1 act to affect pupilation time through their effects on biosynthetic gene transcription, with their ultimate consequence on pupae size. CncC and dKeap1 were shown to have both congruent and opposite effects on transcription of many target genes.  The ecdysone-regulated early puff genes are example of the of concert effects of the protein, as reduction of either resulted in reduced transcription.  The transcription of the xenobiotic gstD1 and gstE1, however, stood out as examples of opposing mechanisms of regulation by the proteins.  Differential xenobiotic response is evidence of antagonistic effects of dKeap1 through CncC transcription.  The harmonious ecdysone gene regulation, on the other hand, is evidence of concerted chromatin binding by the two proteins.

The metamorphosis model (Fig 3) shows the central importance of CncC and dKeap1 in the metamorphosis process of Drosophila species, whereby both genes controlling hormone production, in the prothoracic gland, and the hormone-targetted genes in other organs are affected by the protein complex.  The proteins are shown to regulate transcription of early ecdysone-inducible genes found in many target tissues, including that of the salivary gland.

Fig 3. Model of regulation of metamorphosis by Ecdysone

The control of both metamorphosis and xenobiotic regulation by CncC and dKeap1 would point to a shared common ancestry for these processes.  The authors wish to test the effects of environmental stresses on CncC and dKeap1 functions in the future.

I found many strengths in the article. The information was presented clearly and was well-organized, with the data and graphs were all relatively easy to interpret. The authors also offered a very thorough and methods section.  The study did not present any glaring weaknesses that I noticed. The authors’ research appears sound and provides ample support for their paper.