Thomas Hunt Morgan began using fruit flies in genetic studies at Columbia University in 1910. His laboratory was located on the top floor of Schermerhorn Hall, which became known as “The Fly Room.” They started off experiments using milk bottles to rear the fruit flies and handheld lenses for observing their traits. The Fly Room was the source of some of the most important research in the history of biology. Morgan and his students eventually defined many basic principles of heredity, such as sex-linked inheritance, epistasis, multiple alleles, and gene mapping.

The fruit fly is considered an ideal model organism because it is complex enough in that the embryo is similar to some degree to higher eukaryotes, including humans and yet, Drosophila is also easy to study in the laboratory. However, this organism is of particular interest because researchers can simply control gene expression in the embryo by essentially creating gain or loss-of-function conditions. Thus, the fruit fly becomes a living test tube where researchers are able to evaluate the function of genes in a living organism. A number of molecular techniques are also available to help us develop models of the biological function, which are then re-tested in the embryo. In addition, further studies have recently been pioneered using embryonic live imaging to track the various developmental processes that ultimately make Drosophila a unique model organism.

Drosophila melanogaster is one of the most studied organisms in biological research, particularly in genetics and developmental biology. The reasons include:

During embryogenesis, PIWI proteins serve a necessary function during mitosis. These proteins are responsible for chromatin structure and spindle formation, and function through an epigenetic pathway. To learn more, click here.

To learn more about the xenobitic response regulation of metamorphosis in Drosophila, click here. 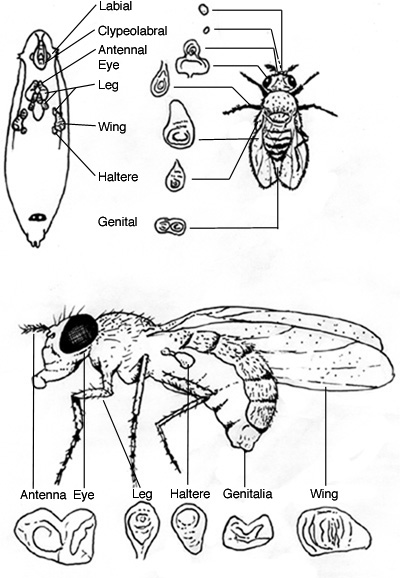 19 imaginal discs (9 pairs plus 1 fused pair)
Each disc predetermined as to developmental fate.
Contains hundreds to thousands of cells.
Distinguishable by location, size and shape.
First seen as thickening of epidermis that later invaginates.
Single-layered epithelium, partly folded, attached by stalks to larval epidermis.
Can be dissected & transplanted to abdomen of adult flies, where they remain in larval state, slowly grow.
Can be serially transferred every 2 weeks from adult to adult.
Once put back into larva, and larva induced to pupate, transplanted disc will evert and form original predetermined adult structure.
Isolated discs will also evert & form correct adult structures in Petri dishes upon exposure to ecdysone, a steroid hormone that regulates molting.

Maternal Effect Genes and Establishment of the Body Plan:

majority of posterior system genes required for localization of Nanos and Pumilio to posterior pole.  Nanos is the posterior determinant, but is not a transcription factor.  Instead, Nanos represses translation of maternal mRNAs for Bicoid and Hunchback.  Pumilio appears to regulate the diffusion or activity of the Nanos protein.  Oskar is another posterior system gene; posterior localization of maternal Oskar mRNA specifies pole cells.  Caudal gene expression is zygotic, and encodes a homeodomain protein, with vertebrate homologues (Cdx).  Caudal is thought to be the posterior transcription factor.  Mutations in mouse Cdx-2 cause death early in development 3-5 days p.c. for homozygous mutants, or varying degrees of homeotic transformation of vertebrae and skeletal structures for heterozygotes, with high incidence of multiple intestinal adenomatous polyps (Chawengsaksophak et al., 1997).

Torso encodes a transmembrane receptor tyrosine kinase.  Maternal Torso mRNA is not translated until after fertilization.  Neither Torso mRNA nor protein show terminal localization; they are distributed uniformly throughout the egg and embryo.  Trunk, Fs(1)Nasrat and Fs(1)pole hole presumably generate a localized signal that activates Torso at the termini.  L(1)pole hole (aka D- raf) is a Drosophila homolog of mammalian c-Raf, and transduces the Torso signal.  One final gene in this pathway, Torso-like, acts in the maternal somatic follicle cells, near the posterior pole of the oocyte.

Toll encodes a transmembrane receptor with an extracellular domain similar to human thrombin receptor and intracellular domain similar to the mammalian IL-1 receptor.  Like Torso, Toll is expressed uniformly throughout the embryo at the syncytial blastoderm stage.  Upstream genes, including Snake and Easter (both encode serine proteases) and Spatzle, generate the ventral signal or ligand in the perivitelline fluid for Toll.  Downstream genes encode a signal transduction pathway for Toll; Dorsal is homologous to mammalian transcription factor NFkB, Cactus is homologous to IkB, and Pelle encodes a serine/threonine protein kinase.  Cactus and Dorsal form an inactive complex localized in the cytoplasm.  Activation of Toll results in phosphorylation of Cactus by Pelle, and release of Dorsal which transits to the nucleus and acts as a transcription factor.  The function of Tube is still unknown.  Dorsal protein in ventral nuclei represses expression of Zerknullt (Zen) and Decapentaplegic (Dpp) and induces expression of Twist and Snail.  Finally, at least 3 genes are required in the maternal somatic follicle cells.  Pipe, Nudel and Windbeutel are expressed in ventral follicle cells to generate a ventral signal in the eggshell or the perivitelline fluid to activate proteases encoded by Snake and Easter.

How is the initial polarity of the egg determined by interactions with the follicle cells?

Torpedo (aka DER) is an epidermal growth factor (EGF) receptor homolog whose expression in dorsal follicle cells is required for dorso-ventral patterning of the embryo.  Torpedo mutations cause ventralized embryos.  Gurken is a transforming growth factor (TGF) alpha homolog with an EGF repeat, whose expression in the germline (oocyte or nurse cells) is also required for follicle cells to adopt a dorsal identity.  Thus Gurken may act as a signal from the oocyte nucleus to dorsalize adjacent follicle cells.

A-P patterning, or localization of Bicoid mRNA at the anterior pole and Oskar mRNA at the posterior pole, depends on microtubules.  Initially, the location of the oocyte at one end of the nurse cells signals the adjacent follicle cells to adopt a posterior fate.  Microtubules are directed with their minus ends toward the posterior pole, directing the flow of nutrients from the nurse cells towards the posterior.  Then a signal from the follicle cells redirects the microtubules in an opposite direction, and the oocyte nucleus moves anteriorly and to one corner.  Mutations affecting Notch and Delta in the follicle cells all prevent this reversal of microtubules, and cause Oskar mRNA to localize to the middle and Bicoid mRNA to localize at both ends (A-P duplication).

Zygotic Genes and Establishment of the Antero-Posterior Segmentation Pattern:

Induction of Mesoderm and Mesodermal Structures

Induction of Neural Structures and Tissues Along Dorso-Ventral Axis: