Imagine you cut the planarian Schmidtea mediterranea in half and let it be. After a while, you would see two planaria crawling around! How can this be? If you did the same with a human, you would certainly not get two bodies. The answer lies in the stem cells, or neoblasts, of this planarian.

The neoblasts are involved in generation of new tissue when it is damaged or old. Neoblasts are located throughout the body of S. mediterranea and are mitotically active throughout the organism’s life.  They are pluripotent, meaning they can give rise to any of the 40 different types of cells in the planarian’s body. Planarian neoblast research may help us understand properties of  vertebrate and human stem cells. Stem cells have been eyed for their use as future therapeutic treatments of cancers and incurable diseases. Naturally, one of the most important questions to researchers was how a pluripotent stem cell determines lineage (what kind of cell it becomes).

Below is a depiction of how stem cells proliferate based mortality events. 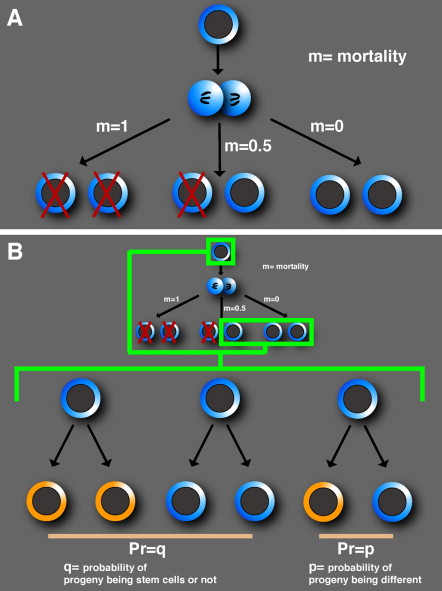 Fig. 2. Models of stem-cell population dynamics: mortality, proliferation, and differentiation of stem cells. (A) Probabilistic outcomes of mortality events in effecting regulation of stem cell population numbers. Red crosses indicate death. (B) Deterministic and stochastic models of stem cell population dynamics of cells that scape death (boxed in green). The deterministic model posits that a small number of stem cells reside in a niche, each of which divides asymmetrically to produce a stem cell and a transient amplifying cell. Stem cells in this model are, thus, ‘immortal’. The stochastic model postulates multiple stem cells occupying a niche, and each stem cell division yielding two, one, or no stem cells (or alternatively zero, one, or two proliferating transient amplifying cells). The net result is a ‘drift’ in the numbers of descendants of each stem cell lineage over time.  Source: Alvarado et al.

Eisenhoffer’s Molecular Analysis of Planarian Stem Cells
George T. Eisenhoffer and colleagues preformed irradiation experiments on S. mediterranea to observe the effects on gene expression, regeneration, and growth. Irradiation causes disruption and elimination of neoblasts. Eisenhoffer and colleagues used this information to hypothesize that genes downregulated one day after irradiation were likely to be involved with stem cells or newer progeny, while genes downregulated by day 7 after irradiation and not on day 1 were likely to be involved with terminally differentiated cells or older progeny of the stem cells. Labeling neoblasts with BrdU, bromodeoxyuridine, was a very intelligent idea by Eisenhoffer and colleagues, as it only stains proliferating cells which in this case are the neoblasts. The purpose of labeling neoblasts with BrdU was to look at spatial and temporal gene expression.

Gene Expression and Location
Using WISH (whole-mount in situ hybridization), Eisenhoffer and colleagues found four unique groups of genes after irradiation experiments. The first group contains genes that are downregulated 1 day after irradiation. This group contained genes such as Smedwi-1 and Smed-bruno-like-1. The second group of genes found were those that were downregulated after 24 hours and included the genes Smed-NB.21.11e and Smed-NB.32.1g. The third category of genes was downregulated 7 days after irradiation of the planarian. The fourth category of genes was expressed in the whole body; the only reason the authors gave for not studying this group further was lack of specificity in where these genes were expressed- this is one area the authors should have expanded upon.

The figure below shows the results of Eisenhoffer’s irradiation experiments. The expression of genes in each category changes with time, as shown by the bottom panel. As time progresses, post-mitotic progeny cells move anteriorly to the photoreceptors (cells move outward). As they do so, cells also express different categories of genes as they differentiate. The authors were primarily concerned with the following genes in this study: 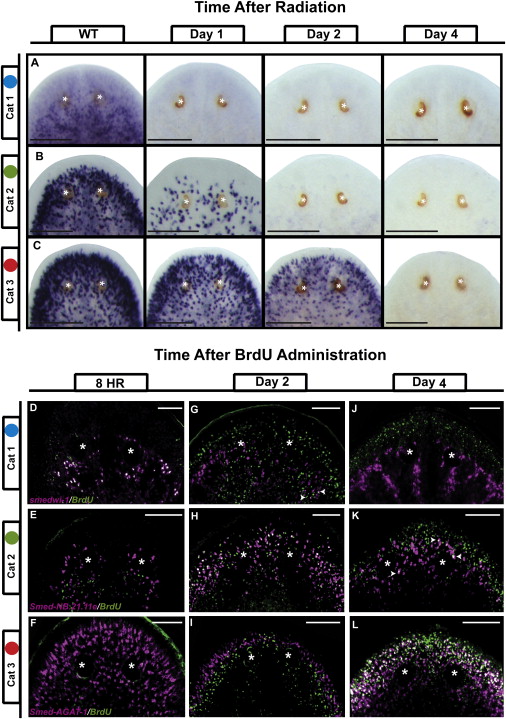 Figure 2, below, compares the expression patterns of representative genes of each of the four categories with each other. Combined with the information from double fluorescent in situ hybridization, the gene categories were found to be located in distinct locations: category 1 genes were expressed in mesenchymal cells, category 2 and 3 genes were expressed in the periphery and anteroposterior and dorsoventral axes of the worm. The diagram below depicts where these classes of cells are found in S. mediterranea. 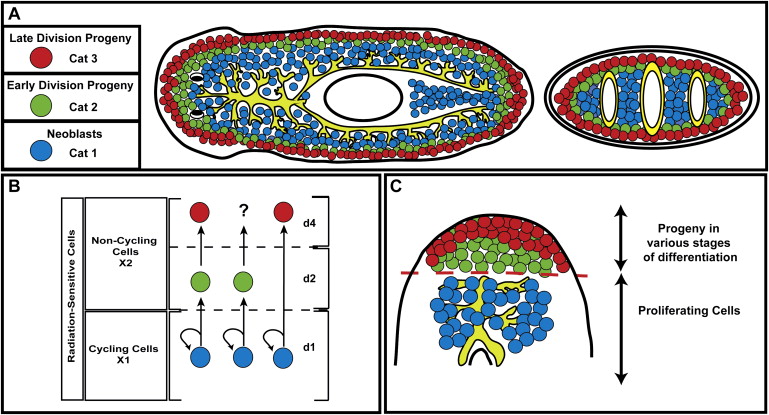 Figure 6.Planarian ASCs and Their Descendants(A) Distribution of expression patterns observed for Categories 1, 2, and 3 genes in cells along the anteroposterior (left diagram) and dorsoventral (right diagram) axes.(B) Lineage determination in planarian ASCs. Three different scenarios for changes in gene expression during migration are depicted.(C) Population dynamics of ASCs and descendants during regeneration. Proliferating ASCs are restricted to the area below the amputation plane and give rise to descendants that migrate into the blastema tissue and differentiate into the appropriate cell types. Dashed red line, amputation plane.  Source: Eisenhoffer et al.

So why is a study like this important to us? If we ever intend to use stem cells to generate tissues for grafts and organs, we must know the genes that control the pathway to get from a single pluripotent stem cell to the highly-specific cardiac muscle cells. Studying planarian stem cells may answer our questions about the use of stem cells in medicine and repair.

Final Remarks
The authors say one of the follow-up experiments will involve using RNAi on lineage markers and looking for more irradiation-sensitive genes. I believe this would be an excellent next step, and that looking at possible regulatory molecules would also prove useful.